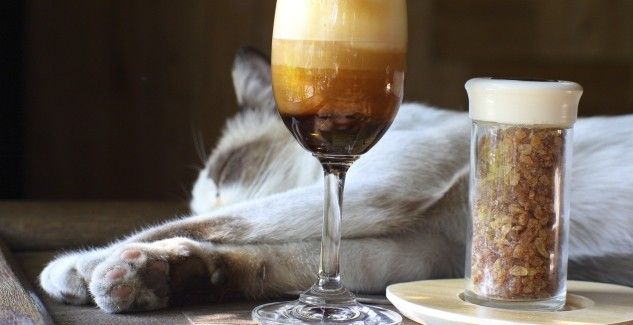 The fun and relatively modern story, of a pub and winter’s classic.

To be prepared, even at home, with the original recipe.The word “Irish coffee” makes people think of big glasses of very warm coffee with powerful alcoholic powers, sweetened by a touch of whipped cream. Irish coffee could be thought to be very old, such as beer and other Irish tradition, but instead it is a very modern invention and quite random as well.

Foynes is a small eastern Irish city, quite unknown, which hosted for years the most used airport to reach the United States. In the ’40’s the connection was a typical place for immigrants to pass by, as well as for Hollywood actors, singers, and other VIP’s, who had to wait for the flight change, which at the time could take up to a day.
Joe Sheridan was a young chef, working for the airport restaurant’s bar, and a night back in 1943 saw a huge crowd of passengers come tired, cold, and stressed out, after a cancelled departure for New York City, due to bad weather. In order to prepare something strong, warm, and excited, he poured some coffee, whiskey, sugar and whipped cream in a cup. The improvised recipe had great success, and one of the American passengers raised his eyes from to cup to ask the chef “is this Brazilian coffee?” Joe Sheridan’s ironic, yet genius response was “no sir, it’s Irish Coffee!”
After some weeks the young entrepreneur knocked at the door of his boss, Brendan O’Regan, to propose Irish coffee in the menu. “Genius” he responded, and since then Irish coffee became the most consumed product at the airport.
The story of Irish coffee would have ended there, but a correspondent from “The San Francisco Chronicle”, Stanton Delaplane, passed by the Foynes airport and tasted the coffee. He liked it so much that he brought the recipe back to the best barista in the city, Jack Koeppler, who started to serve it in his bar called Buena Vista, proclaiming the success.
A few years passed by, and the across-ocean connections evolved to the faster and more modern airplanes,  and the Foynes airport stopped being such a busy place. Joe Sheridan moved to the new airport until 1952, when the Buena Vista in San Francisco offered him a prestigious job and a piece of history of the world’s most famous drinks.
Today Irish coffee is celebrated at the Foynes Flying Boat & Maritime Museum, with its original recipe:
Condividi l'articolo