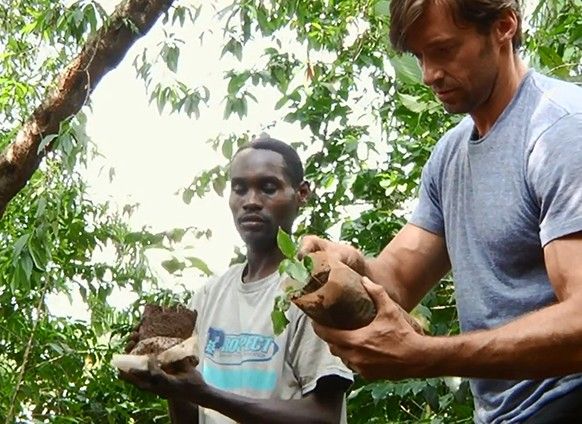 Coffee has millions of connoisseurs around the world of all ages, cultures and social backgrounds. It doesn’t come as a surprise that celebrities love this beverage too and never miss the chance to show it. These 5 celebrities are real coffee lovers who are ready to do crazy things for their favourite beverage.

In an espresso cup or the American mug, coffee can only but give rise to great passion. This is because it isn’t simply a beverage. It is also the symbol of the perfect break from our hectic everyday lives, a special treat to wake up gently in the morning, perhaps capturing the moment on Instagram (http://blog.caffevergnano.com/lifestyle/il-caffe-protagonista-di-instagram/). Celebrities love coffee too, sometimes with a pinch of craziness and extravagance that only characterises true stars.

The Australian actor stated that coffee is a real culture for his compatriots. He loves this beverage so much that he has made a mission of it. Indeed, Jackman has created the Laughing Man Coffee Foundation, which supports the development of coffee farmers communities around the world—a responsible, far-sighted gesture and all credit to him for that!

The bassist of the famous American punk rock band, Green Day, defines himself as a true coffee fanatic, provided it is good not only to the palate but also for the environment. When he found out that Caffè Vergnano had launched the first compostable capsules on the market (https://www.caffevergnano.com/capsule-caffe-compostabili/), the band’s agent contacted our company to meet Carolina Vergnano at their concert in Monza on 15 June 2017. In the pictures, their encounter in the backstage before the band’s performance.

David Lynch said he is “obsessed with coffee”. He adores it and, even in Twin Peaks, he made no secret of it, since in many scenes the real star was coffee. He recently wrote about his love for coffee even in the “Obsessed” column of the Huffington Post, telling about how he manages to find his source of inspiration in coffee.

Robert De Niro is the protagonist of what perhaps is considered the most famous film scene in the history of cinema starring coffee, in “Once Upon a Time in America”. A young De Niro was offered a cup of coffee: for a long minute, the only sound that you hear is that of the coffee spoon he uses to stir his coffee, while all the actors remain in absolute, tense silence. De Niro has recently put his passion for coffee at the service of less fortunate people. Indeed, the actor “sold” to a fan an appointment in front of a steaming mug and the proceeds were donated to charity.

Even past celebrities shared their love for coffee. Johann Sebastian Bach, for instance, loved it so much that he dedicated a comic opera, “The Coffee Cantata”, to coffee in 1732, in which he made fun of contemporary critics when the first Viennese cafés—considered as vicious places—were first opened.

The famous philosopher was one of the greatest and most avid coffee drinkers: according to his biographers, his passion led him to drink 50 to 60 cups a day. Despite his doctor’s warnings, he died at the age of 84.